Time travellers rejoice! How to always know what your tea costs I hate it when this happens:

You are taking your favourite lady companion out for tea, in say, 1870, where normal working-class quality tea is sold at 3s. 4d. per pound-weight. But having just rescued her from a top secret research facility in 1973, and, to be honest, finding yourself a little short on funds, you are uncertain if that is truly a good deal on CTC grade Orange Pekoe. What to do?

Have no fear! Now with the Time Traveller's Investment Calculator, available online and on the app store, you can find out with a few clicks that you are spending the 1973 equivalent of £1.32. That's a steal compared to the £12.40 it would cost you today.

(And the teapot can be yours, on etsy, if you click fast.)

World Storytelling Day is over. Now what? Here's a suggestion! #wsd2012

There has been a bit of chatter on the World Storytelling Day listserv about WSD events that took place across the globe. It is always great to hear these little stories, but I, greedy story-lover, always want more.

I love the idea of World Storytelling Day, knowing that all over the globe storytellers and listeners are sharing tales, united by a love of the oral tradition. But I always want to know more about what happened, and some years it seems we get so wrapped up in the planning of our events that by the time the day is over, we don't think of sharing tales of our experiences.

So, I'll make it easy for all of you. I KNOW some of you took photographs, and many of you made posters for your events. We'd all love to see them. You have a couple options, but I'll put two of the easiest forward.

I look forward to seeing your images! We've been celebrating WSD here in Newfoundland for a while now (listen to a recording of the 2007 concert here). This  year's event is being organized by Sharon King-Campbell, and will include storytelling for kids and for adults. Check here for more details.

Anyone, anywhere, can organize and host their own event. There is no charge to participate. Please use the WSD logo, designed by Swedish storyteller Mats Rhenman, free for storytelling events on March 20th.

To register your event, check out the World Storytelling Day website. If you are tweeting about your event, use the hashtag #WSD2012

"The sausage stayed by the pot, saw that the food was cooking well, and, when it was nearly time for dinner, it rolled itself once or twice through the broth or vegetables and then they were buttered, salted, and ready."
- from "The Mouse, the Bird, and the Sausage" by the Brothers Grimm.

Stella told a Chinese-Tibetan story where a household of strange items, including a mud pie, an earthenware jar, a sewing needing, a grain of wheat, a fly and a turnip divide the house's chores between them, with disastrous results. It reminded me immediately of the Brothers Grimm tale The Mouse, The Bird and The Sausage. A somewhat obscure story, and one that is rarely told anymore, this was the second time in the past month that the story had reared its little head. When things make themselves known, they must be doing so for a reason. And so, here is that story, from the Brothers Grimm, translated by Margaret Taylor in 1884.
Posted by Dale Jarvis at 09:33 No comments:

Exploring storytelling: From The Crow's Nest to The Turnip Princess 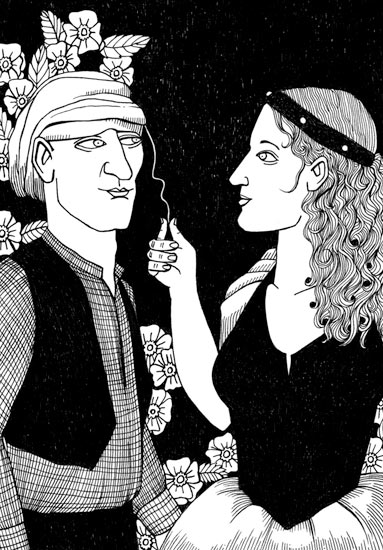 It seems like I've been gone for ages, so I'm delighted to be back hosting the St. John's Storytelling Circle this Thursday, March 8th, at 7:30 pm at the Crow's Nest Officers Club. If you haven't been in the Crow's Nest before, it is a great space, one of my favourite hidden gems in St. John's. The open mic storytelling circle has been running there every month (except Decembers) for the past six years, and you never know what you'll hear.

Over the years, a group of regular storytellers has evolved, who tell tall tales, ghost stories, personal narratives, and recitations, but it is a rare night when there isn't someone new who gets up and shares some kind of story. All kinds of stories are welcome; the only rule is that stories must be told from memory rather than read from the page. Come out, and chances are you'll hear a story you've never heard before. Tickets $3 at the door.

I've been working for the past few months on Brothers Grimm material with my friend Delf Hohmann, who hosted the Storytelling Circle in January. Therefore, it was with delight that I read something that had been posted on Facebook by local performer and author Sara Tilley, about five hundred new fairytales which have been discovered in Germany.

A collection of fairytales gathered by historian Franz Xaver von Schönwerth has been locked away in an archive in Regensburg for over 150 years, a collection which is now re-emerging.  According to the article in The Guardian, in 1885, Jacob Grimm said this about von Schönwerth: "Nowhere in the whole of Germany is anyone collecting [folklore] so accurately, thoroughly and with such a sensitive ear." Coming from Jacob Grimm, that is a huge compliment, and I look forward to seeing the entirety of von Schönwerth's work.

Many of von Schönwerth's tales are not yet available in English, but you can read one quirky little story already, The Turnip Princess.

Do you know any Newfoundland superstitions about bread? #amwriting #culture

Many people have heard of the traditional Newfoundland belief about having bread in your pockets as a charm against the fairies. But what kind of bread? And what other folk beliefs are out there about bread or baking? I'd love to hear your stories and memories. If you have heard of an old superstition about bread or bread making, send me an email at info@hauntedhike.com or leave me a comment below.
Posted by Dale Jarvis at 08:10 3 comments: