First time filmmaker Mike Hickey grew up in Grand Falls. A fan of horror movies and ghost stories, there was one local tale from his childhood that stuck in his mind.

“I remember when I was a kid, there was a house that was kind of spooky,” remembers Hickey. “It was this big mansion downtown off Goodyear Avenue, on a street called Dunn Place.

“The story was that there was a little boy that lived in that house that was playing superhero one time,” says Hickey. “He was sliding down over the banister with a towel as a cape, or a scarf, or something like that, and it got caught, and he was hanged. It is a really sad story, it was devastating for the family, but it became known that this house might be haunted by this little boy.”

“The people who bought the house after used to have a big thing on Hallowe’en,” Hickey adds, “where they would do up the house really well, which added to the spookiness of it. It was always that spot you were kind of wary of you were a kid. I had some friends who lived by it, and the house always creeped me out. It was this huge mansion of the road, and there not many of those in Grand Falls. That one certainly gave me the spooks.”

Now living in St. John’s, Hickey took part in an introductory filmmaking course with NIFCO, the Newfoundland Independent Filmmakers Cooperative. There, he came up with the idea of basing a film on the Grand Falls ghost story.

“The class develops a film,” explains Hickey. “The idea came up there, and even though the class ended up deciding on something else, I decided I was going to take that idea and run with that for my first time film.”

“You apply, and give them a script, and if it is approved, then they provide you with all the gear, they help you organize a volunteer crew,” says Hickey. “It is a great, great tool for young and early filmmakers. It is fantastic for them to have this to work from. NIFCO is such a great tool that a lot of people don’t know is there.”

Hickey worked with local fimmaker Roger Maunder on the project.

“He taught the course, helped with the movie,” says Hickey. “I couldn’t have done it without him.”

The story of “Our House” revolves around a couple who arrive in a new town. They move into an old house, where strange things start to happen.

“I’m from Grand Falls, I wanted to incorporate something from my childhood,” says Hickey. “Kid ghosts are always kind of scary. It is always that little bit more creepy when it is a little kid, so I took that story and made up a ghost story from that anchor. It was inspired by that, but there were some changes to it, to make it different.”

The film is now finished, and Hickey plans on a local screening sometime over the next few months. After that, he will submit the film to festivals.

Hickey is hopeful that “Our House” will be a step towards getting more movies made.

“Telling more ghost stories is my intention,” he states. “That is why I got into filmmaking. I really like horror movies, and the ones I wanted to see with a certain style weren’t actually there. There is still that door for me to get in and make the one that I want to see. “Our House” is a start.”

Hickey is coy on how the movie ends, however.

“It’s weird talking about the story without giving too much away,” he says. “It’s only a ten minute movie. I don’t want to spoil everything for everybody!” 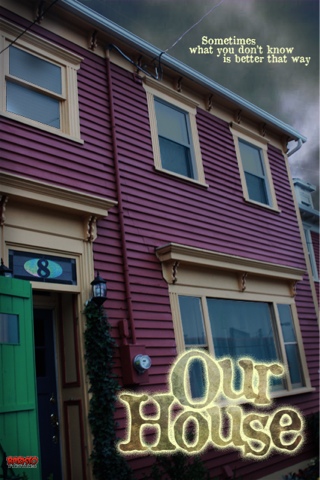