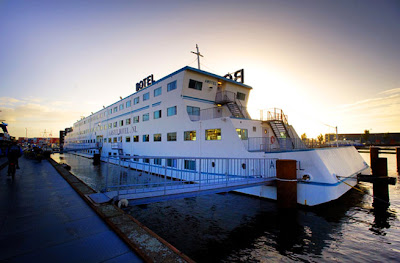 I took the train from Brussels to Amsterdam today, and made my way to the boat hotel on the harbour where I'll be staying for the last few days of my European storytelling adventure. I arrived in time to catch a water taxi and take in the very end of the Storytelling Festival Amsterdam's expert meeting on the power of storytelling. The meeting was in Dutch, but it ended with words in English from Canadian storyteller Joe Osawabine, with the Debajehmujig Theatre Group from Manitoulin Island.

There was a dinner for storytellers after, with a surprise for me, a meet-up with my long-distance storytelling friend Melanie Plag. Melanie and I met online years ago, and we seem to have emerged as the online volunteers for World Storytelling Day. We met in person in Zwolle a few years ago, but hadn't seen each other since, so it was great to share a meal and share stories.

And a great meal it was, a traditional Dutch stamppot (what my friend Veva in Flanders would call stoemp) - a traditional Dutch dish made from a combination of potatoes mashed with one or several other vegetables. For us, they had four kinds of stamppot, including one with sauerkraut, along with meatballs, sausage, and fish. So we sat and laughed and talked about all kinds of storytelling-related things: the work of the Federation for European Storytelling (FEST), story trails, kamishibai, the use of costume in storytelling, St. George, and local legends and miracles - the kind of conversation storytellers absolutely love to have.

After dinner, a remarkable treat. The festival organizers had tickets for us to see the more-than-sold-out performance of "Iran vs Israel - Kingdom of Fire and Clay"- simply one of the best storytelling shows I've seen in ages.

Here is the description from the festival program:

Two young artists meet in Amsterdam. One's an Israeli, the other an Iranian. Sworn enemies, or possible best friends? After performing two separate but highly successful shows at the International Storytelling Festival Amsterdam, they decide to combine forces and make a show that dives into their pasts, their cultures and the source of their countries' enmity.

The Kingdom of Fire and Clay combined classical Jewish and Iranian tales (with a much appreciated guest appearance by my old friend the Golem of Prague) as well as the personal stories of Raphael Rodan (Israel) and Sahand Sahebdivani (Netherlands/Iran), along with backgammon, traditional and contemporary music on piano, double bass, and a range of other folk and classical instruments, humour, passion, friction, movement and tales obviously told straight from the heart. As far as performances go, it was certainly one of the highlights of my trip, and the type of show I would like to see more of in Canada.

Then, I took the water taxi back across the harbour to my snug berth on The Botel. Tomorrow, more stories, and exploring Amsterdam.  Tot ziens!

It was great to meet you again, particularly because it was unexpected. I must say, that I enjoyed the informal 'storytellers chat' as much as the fabulous performance afterwards. I hope you enjoy Amsterdam and have a good series of performances on the festival!