From the creator of the award-winning St. John's Haunted Hike, storyteller and folklorist Dale Jarvis, comes an evening of stories of sea monsters and ghost ships, told within the (relative) safety of the lighthouse parlour at Cape Spear Lighthouse National Historic Site.

Note: Seating is limited! Tickets available at the lighthouse door. Not responsible for kraken attack.

Philip Goodridge joins the cast of "Ghosts of Signal Hill"

Returning storytellers Dale Jarvis and Chris Hibbs are joined for this summer's run of "Ghosts of Signal Hill" by local actor Philip Goodridge, sharing the role of Lieutenant Ranslaer Schuyler.


Philip is a graduate of York University’s Theatre program (performance/playwriting). He was most recently seen in Joint Productions’ slapstick farce Don’t Dress For Dinner. He has also worked with TaDa! Productions (Cabaret, Alice In Wonderland, The Rocky Horror Show, White Christmas , Chicago, Evita and several Our Divas concerts), Best Kind Productions (Avenue Q), RCA Theatre (iFrancoPhone, Makin’ Time With The Yanks), Rising Tide Theatre’s Summer In The Bight, c2c (Bent, Beyond Therapy) , Beothuck Street Players (Blood Brothers, Jesus Christ Superstar) Peter MacDonald Productions (Joseph and His Amazing Technicolour Dreamcoat, Anne of Green Gables) etc. He has written several plays including Eli and The Deathcurse, Above and Below, The Thieves’ Tale, Once Upon a Blah Blah Blah..., and Aquarium. His most recent play, The Ogre’s Purse (RCA Theatre) toured schools across the province in November. As a director he has worked with Shakespeare by the Sea (Romeo and Juliet, Above and Below) as well as his own work Three Tales of Terror: Old Time Radio Drama and The Saucy Personnel. He is also singer/songwriter performing solo as well as part of the duo The Duds with Melanie O’Brien Hutton

Philip's first performance is this Friday, 8pm! Welcome to the cast!

Note: due to a scheduling conflict, Saturday's performance will take place in the Signal Hill Visitor Centre Theatre, instead of in the Queen's Battery. 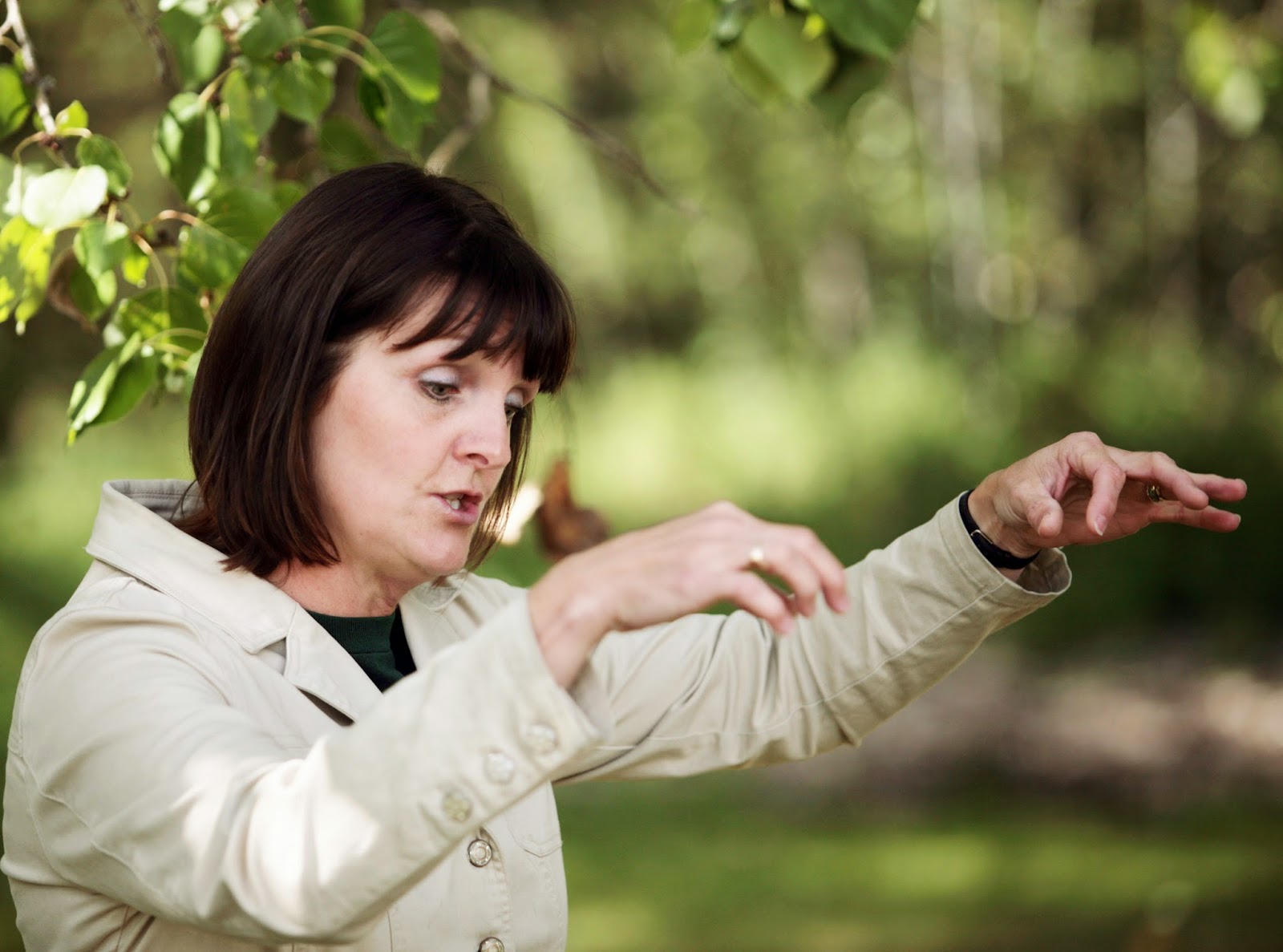 Bowring Park is turning 100 and is going to celebrate! On Sunday, July 13 from noon to 4:30 p.m. the Bowring Park Foundation is hosting a birthday party with free events for everyone.

One of the events is the next in our family storytelling series. Every Sunday afternoon for the rest of the summer, there will be free family-friendly storytelling at the Peter Pan statue, with a variety of local and visiting storyteller. For this Sunday only, the action will shift up to the Bungalow as all the 100th birthday activities are taking place up in that end of the park.

Sunday's storyteller is Kathy Jessup, a professional storyteller visiting from Alberta. Over the years she’s performed her original tales in countless schools, libraries, concerts and festivals across Canada — from Inuvik to Regina, and from Vancouver to Halifax, and now in St. John's. Kathy’s stories and articles have appeared in various publications including the children’s magazine chickaDEE, and the Alberta Centennial anthology Under the WideBlue Sky: Alberta Stories to Read and Tell published by Red Deer Press.

All other storytelling sessions for the rest of the summer are still scheduled at the Peter Pan Statue. Next week: Mary Fearon! 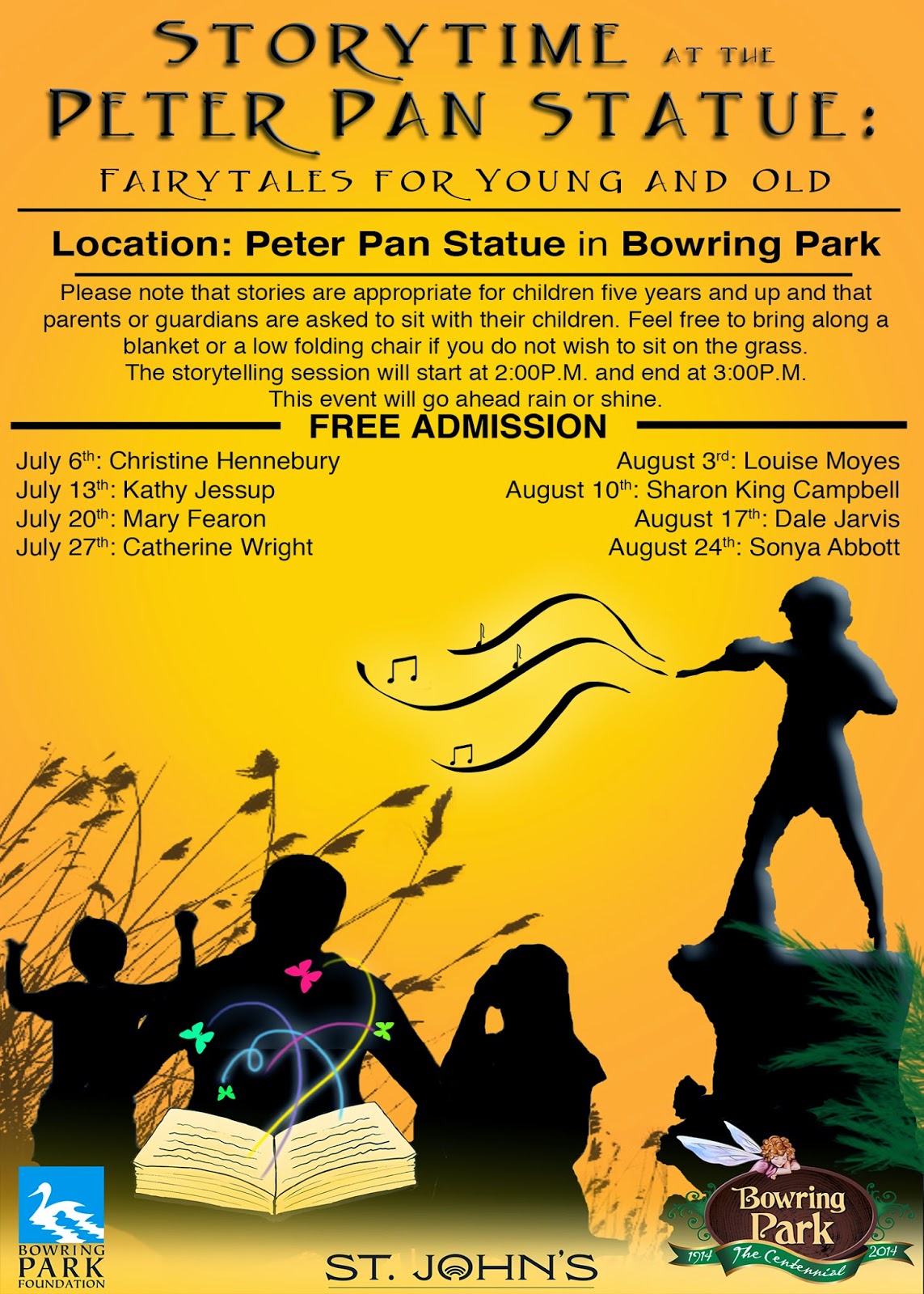