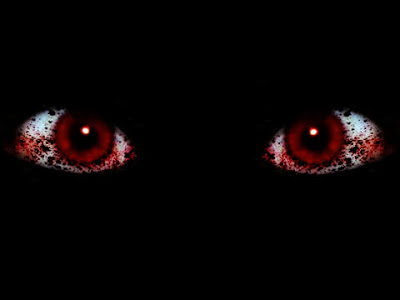 Down at the end of Angle Brook Road in Glovertown is the impressive ruin of an old pulp and paper mill. It is also the site of a creepy local urban legend about a mysterious figure known as “Red Eyes.”

You can read about the history of the mill and see more great photos on the Hidden Newfoundland website here. 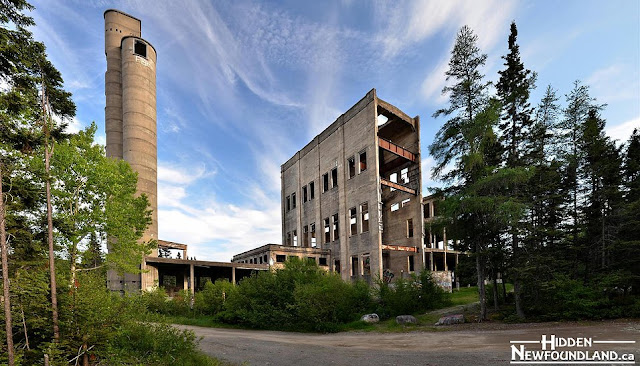 For locals, it is a creepy spot, tall and still, empty, and dark even in the daylight. “The Plant” became an after-hours hangout for teenagers, and before long, rumours began to circulate that the old mill was haunted by a spirit known as Red Eyes. It got to the point that many people would not dare go there at night by themselves.

“Eyes are seen in the tower,” one woman told me “The red eyes are said to be from a man that died while building the mill.”  A second woman told me that people used to hang out at the mill, and “would see a worker’s daughter who died there in one of the towers.”

“I heard that apparently it was a man killed during construction,” a third woman told me, who had heard the legend in the late 1980s or early 1990s. “He fell into the cement mixer or something like that, and I think he was built into the place. At night people would say ‘Be careful of Red Eyes!’ It was just an eerie place to be around, even in the daytime. I was only up there once at night, and not for long.”

A Glovertown man who also heard the story in the 1990s told me much the same thing: “He was a worker that fell in the pour when they poured the concrete for the tower. They never got him out. He stuck in the walls, and he still there.” Yet another man told me the spirit was that one of the construction workers who was blown of the top of the building while the mill was being built. “You can see his red eyes glow from the top once a year on the date it happened,” he added. “Some people say he was pushed.”

I posted a request for information on social media, and was almost immediately contacted by someone on Facebook, who wished to remain anonymous.

“I'm born and raised in Glovertown, and spent my teenage years in ‘the plant’ as we like to call it,” he told me. “I've heard of the story and I'll tell you what I know, if you want some info?”

Of course, I wanted more info. I called him up to get his version of the Glovertown urban legend, which he too had learned in the 1990s:

“Most of my teenage years were spent at The Plant, the old sawmill. There is a swimming hole next to it. As a teenager, that is where we went. It is only a couple minutes off one of the roads, so it was just tucked away enough that your parents couldn’t see you drinking. The story has been passed down from the older kids to the younger kids, to scare the crap out of them. When I was a kid, the story was that when the mill was built by a Norwegian company, safety was non-existent. One of the construction workers did not show up at the end of the day. They found his body where had fallen down through one of the towers. He died there. They say that to this day his red eyes haunt the plant. If you were there by yourself, you would see these travelling red eyes following you around.”

Do you have a story about Glovertown's Red Eyes? Send me an email at dale@dalejarvis.ca or comment below!