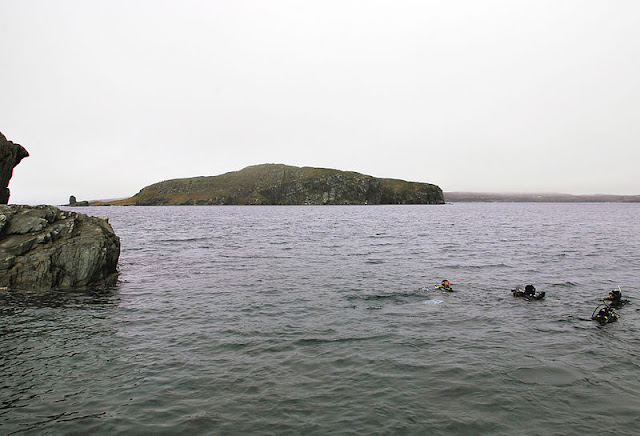 I've been doing some research on stone cairns, markers, and navigational aids in Conception Bay, Newfoundland, which are sometimes called "American Men." I came across this intriguing story about a Will o' the Wisp, locally called a Jack 'o Lantern or Jacky Lantern, which made his home on one particular cairn of rock.

When father was a boy his mother used to warn him of Jack o’ Lantern. Jack o’ Lantern was supposed to live on top of the American Man (the name given to the cairn on top of Big Island in Bay Roberts). The island was not visible from the house as the view was blocked by Big Head…. Jack o’ Lantern was of course marsh gas and was really visible. I have seen him. Father was scared and believed in the tale attached to what he saw. However he did not always obey when threatened. Grandmother would say, “There’s a light on Big Head; it’s after you.” Jack o’ Lantern just appeared on Big Head. He then progressed down the harbour, being very noticeable over the bogs at Running Brook. He then went to the bogs in French’s Cove and from there crossed to his home on top of the American Man on Big Island. (Bay Roberts) Q67-774

From the geographical clues in this, I'm assuming Big Island is what is now called Fergus Island, located near the Bay Roberts Shoreline Heritage Walk. Mike Flynn, local historian, tells me many people from the east end of Bay Roberts refer to Fergus Island as Big Island, and that he also remembers reading about a cairn on the isle.

Does anyone have a memory of a cairn or marker on the top of Fergus Island? Or better yet, know of a historical photo that would show it? Drop me a line at dale@dalejarvis.ca