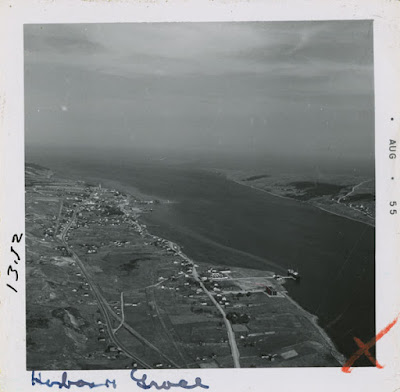 Mysterious lights have a great tradition in Newfoundland and Labrador. There are numerous stories from around the province of an eerie light that would appear in times of danger and was usually followed by a tragic incident.

This pale flame, known in the Latin as ignis fatuus, has been ofttimes reported flickering over marshy ground, and, it is said, over churchyards. It often appears specifically to lead travellers astray, into bog holes, or over cliffs.

This strange phenomena is known most commonly in Newfoundland as the Jacky Lantern, the West Country England name for the Will o' the Wisp. However, it was also known as a Corpse Candle around the capital city of St. John’s, and as a Corpse Light in the picturesque and historic community of Harbour Grace.

Harbour Grace is one of Newfoundland's oldest outport communities, and one with a rich and colourful history. As early as 1550 Harbour Grace was a thriving fishing community, with the majority of fishermen arriving from the Channel Islands. In the early 1600s, oral tradition holds that fortifications were established at Harbour Grace by the famous English pirate Peter Easton, who plundered fishing stations, stole provisions and munitions, induced men to join his fleet, and generally wrought havoc along the eastern coast of Newfoundland.

The community is no stranger to the stuff of legends, and the corpse candle has a firm place in local folklore. In Harbour Grace, however, these strange lights were not always evil or dangerous, nor did they always lure travellers into treacherous areas. In one documented case, one corpse light actually led the Revered Canon Noel and his wife to safety during a blizzard just outside the community.

That event took place at the very beginning of the twentieth century. The Reverend and his wife had taken their horse and sleigh to a blacksmith, several miles distant. Delays meant the couple had to leave during a storm. Their horse was soon bogged down in high snow, and they realized they were completely lost.

A bright light began moving around. Believing it to be rescuers, the couple shouted for help. The light approached them and passed by, but there was no sign of a person carrying it.

The frozen pair walked in the direction of the light. This led them to a stone fence, which in turn led them to a house where they found shelter for the night. When the owners of the house were told of the strange light, they expressed no surprise. The corpse light was no stranger to the citizens of Harbour Grace. It had been seen many times before, generally before some terrible tragedy. For whatever reason, the ghostly glow had decided to protect the Reverend and his fair wife, instead of leading them to their doom.